Hollywood, 1952. Henry Corso performs a costumed gorilla on horror movies and adventure movies. For Jungle Jenna, he must terrorize the leading actress lost in a fake jungle. But scaring the woman he desires is going to be particularly tricky for the gorilla man. 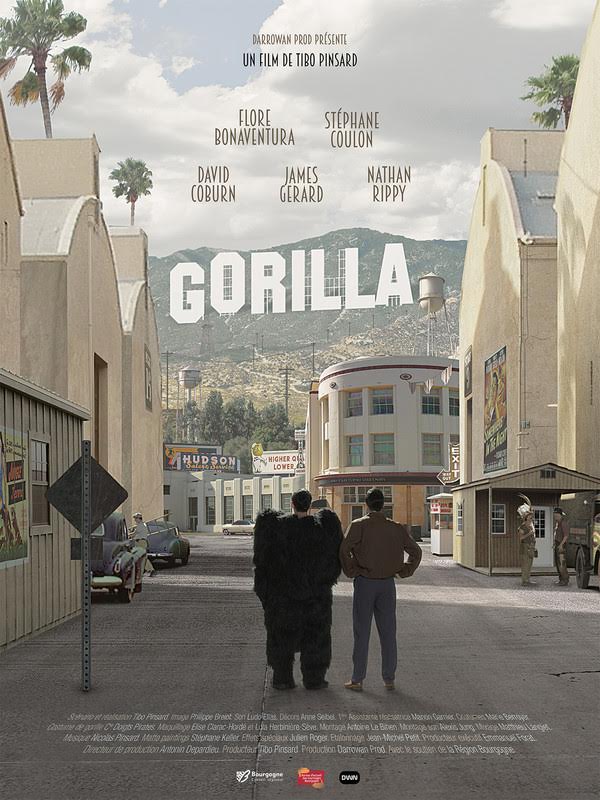 Director bio: A  french director, Tibo Pinsard discovered art when he went to Dijon (Burgundy, France) Fine Arts School. He was a fellow of very different and well-known artists such as painter Yan Pei-Ming and Orlan. The latter deeply influenced Pinsard with her carnal works.

After a couple of years parodying video games with pictures and films, Tibo Pinsard made his first documentary with The Stooges Guide To Eternity, a featurette on Iggy Pop and his band.
In 2008, the director went for fiction. He wrote and directed the Island, starring Alysson Paradis, Simon Charasson and Thierry Frémont. The short tackles one his favourite topics: the lack of communication between people.

After a new documentary on a octogenarian woman living in the Burgundy country entitled La Reine du Meix (The Queen Of Meix), Tibo Pinsard directed Clin d’Oeil (The Wink), a six-minute fanciful short. In 2012 he directed a new fiction, Le Dernier Voyage d’Emile (The Last Trip of Emile), a personal tribute to the king of burlesque Buster Keaton. Since then, Tibo Pinsard has been working on many projects including his first feature.

Director statement: GORILLA is my fifth short film. In that film, I keep digging the question of the lack of communication between individuals. But this time, it’s not only about the loneliness people can feel.
GORILLA is also about desire, how it can connect people together, even if they shouldn’t get in touch or feel something for one and another due to social differences. My main character is a “Hollywood gorilla man” like Charlie Gemora or Ray “Crash” Corrigan were. But my gorilla man has lost his “inner ape”. In a way, he has lost himself and he will have to find what he is good at to be attractive, even with a heavy gorilla suit on his back.
Both the gorilla man and the starlet character almost don’t say a single word. To me it’s is also a way of expressing things more deeply than words could do.
GORILLA is also a tribute to ape movies that have contributed to make me a director. The original King Kong, The Planet of the Apes and Greystoke deeply impressed me as a child and stimulated my creativity to this day.